Today I’m sharing with you a twist on classic and  stuffed French Toast, which is stuffed french toast. It’s a custardy bread filled with cream cheese and strawberries, topped with sweet maple syrup. A quick fact about french toast, it’s not actually French, it wasn’t created in France, nor was the person who created it french.

It was created as a way to revive stale old bread that otherwise would have been wasted, and today it’s turned into a popular breakfast food. The name just comes from a chef named Joseph French. There are endless possibilities when making this, you can stuff it with whatever you want, or whatever you have on hand. It’s breakfast done right. So if you would like to learn how to make this, then let’s get started. 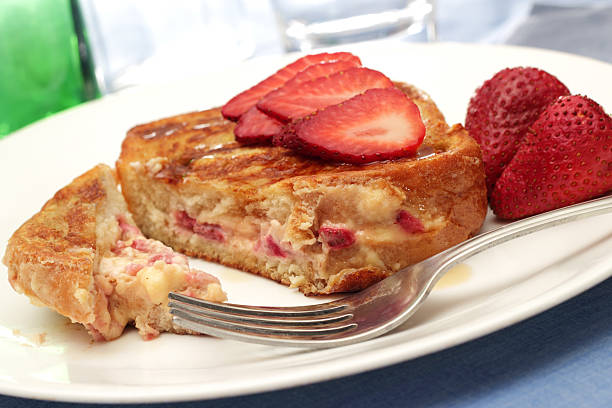 Instructions: How to make french toast

1. First thing for this recipe is to slice some bread. Cut the slices from the middle of the loaf so they will be around the same size. They need to be about an inch thick or 2-3 cm. Lay the slices of bread out on the chopping board while you prepare the filling for french toast.

3. Place the thinly sliced strawberries into a single layer onto two of the slices of the bread. Make sure to leave a small gap around the edge of the bread so it is just the cream cheese mixture. When the French Toast is cooked the cream cheese will melt and create a glue that will hold the two slices of bread together.

5. In a clean bowl make the French Toast mixture to dip the bread into. Crack in two good-quality free-range eggs. Measure out a cup of milk and pour into the bowl with eggs. Use a fork to beat the ingredients together until they are well combined.

6. Place in one of the sandwiches and leave for a minute or so to soak up some of the liquid. While waiting for the bread place a medium-sized fry pan over medium heat and add a small amount of butter to the pan to melt. Turn the bread over carefully, not letting the slices of bread fall apart, and leave for a further minute to soak up on the opposite side.

8. Remove the French Toast from the frypan and place it on a chopping board to slice. Repeat with the remaining French Toast. Cut the toast in half and place it onto a plate. Sprinkle with icing sugar or powdered sugar, drizzle with maple syrup and enjoy.

This is a fun and interesting way to make Classic french toast a little more interesting. There are endless possibilities of what you could stuff the toast with. Banana and Chocolate is an amazing mix. 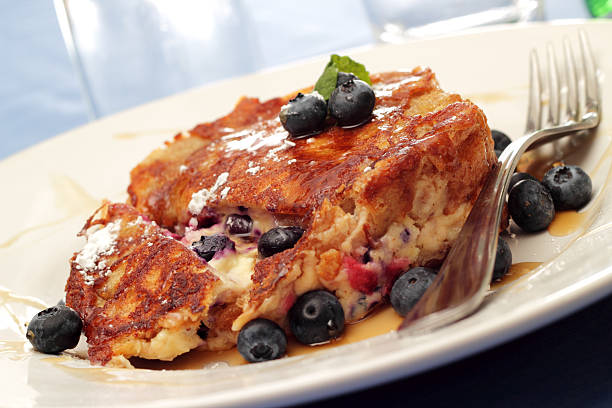 How to make stuffed Franch quickly 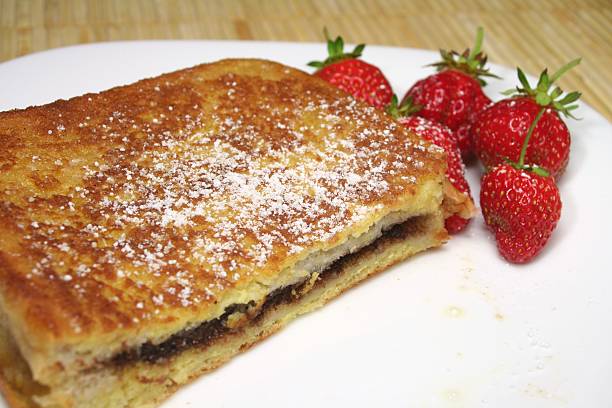